Although confidentiality is crucial in any transaction negotiation, listed companies should pay extra attention to ensuring that the people involved in the deal put a sock in their mouth. Should information on a potential transaction leak to the public too early, there is a risk that the planned transaction hits the rocks. Competing bidders may get interested and speculators, such as hedge funds, may try to drive the targets’ share price up or start bidding on the failure of the transaction.

There are well established reasons why the directors should focus on determining the moment when information on a potential M&A transaction constitutes inside information. When this happens, a listed company must either disclose the inside information to the public or make a decision to delay the disclosure. A company can delay the disclosure where it would be likely to prejudice their legitimate interests provided that this does not likely mislead the public and that confidentiality can be maintained. In practice, listed companies have a more or less permanent interest to delay the disclosure until there is certainty that the deal will be entered into. Early disclosure could attract competing bidders and create incorrect expectations misleading the public.

“As a rule of thumb, listed companies should ensure that the information on an M&A transaction is regarded as inside information at an early stage of the M&A process”

It is not unheard of that the target itself or its advisers leak information to the market in the hope of a more preferable bidder (a so called “white knight”) or as another takeover defense tactic to frustrate the bidder or for testing whether there is any room for higher price. Therefore, from the bidder’s perspective, the earlier the information on the potential transaction leaks to the market the higher the risk is that the transaction price or at least transaction costs increase(s). In a worst case scenario, the leakage may prevent the completion of the transaction altogether. 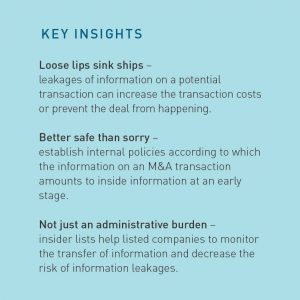