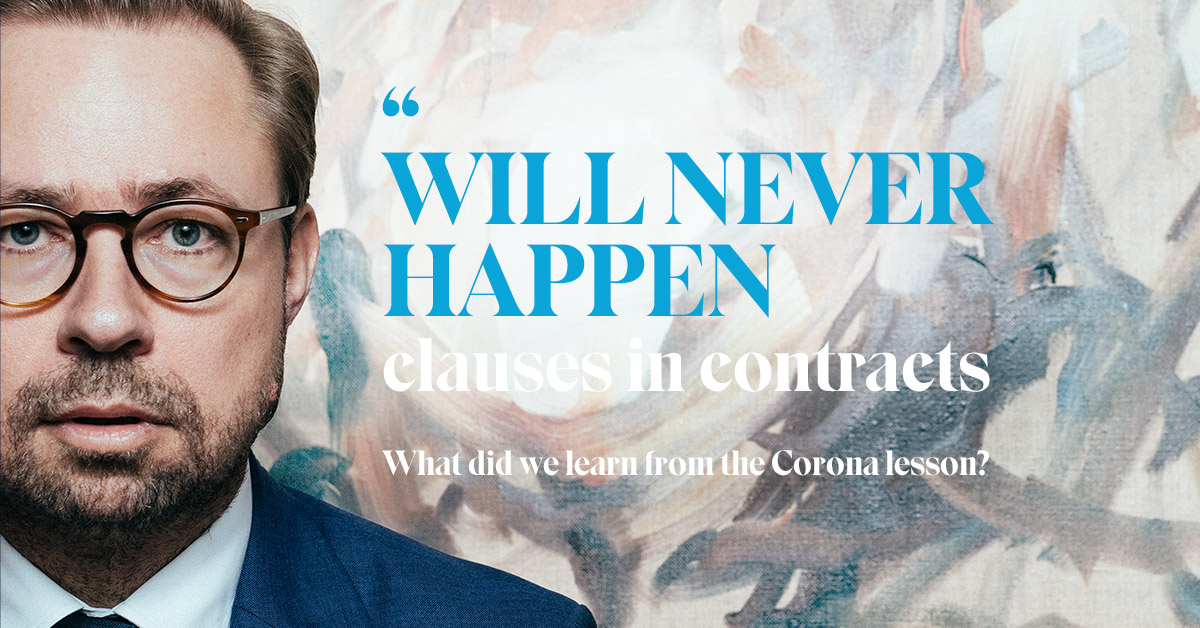 What did we learn from the Corona lesson?

You should never waste a good crisis. This corona crisis has provided us all with a great opportunity to come out of the crisis as a new, better version of ourselves.

Suddenly, we have grown up as human beings and have begun to appreciate the obvious: freedom, human relationships, nature, the family with whom we have been able to spend nights and days in a long time. When the economic plunge took away a third of our fortune, we were given the opportunity to realise that there is something even more important.

This is all fine and could save the world, but I’m also excited to see how much better contract drafters we will be when we step out of this crisis.

Once upon a time, there was a lawyer who drafted a contract and while writing the contract he thought that never ever would any problems arise from this commercial relationship. And so he thought it would not be worth spending too much time on writing unnecessary liability and indemnity clauses. Not to mention those act of God clauses concerning a state of war, a natural disaster, a public transport disruption, a general strike and infectious diseases. Pandemic. Ridiculous. Will never happen.

Then there was the dispute resolution clause, the least interesting item in the whole agreement and, in fact, in the whole legal system. This will never become an issue of dispute, he thought. And if it does, then we will settle it amicably.

And it happened that the dispute resolution clause was nicknamed the ‘midnight clause’ as it was the most insignificant of the clauses and could, therefore, be left to the juniors to draft during the quiet hours of the night, when the chief negotiators had already shaken hands and set out for a beer.

Time flew by and it took a couple of years before dark clouds began to gather. One day, the CEO finally had to dig out this very same contract from the desk drawer. Because for these situations, after all, the contracts are written, he gradually started to understand. He switched on the bedside lamp and started reading.

And just in time, as the first rays of morning sun glimpsed through the kitchen window, he got to the second to last page and read, for the first time, the dispute resolution clause in the contract. His freshly squeezed orange juice went down the wrong tube as it became clear that the looming dispute would be settled on a foreign continent in a foreign legal culture under foreign law and in a court with judges whose expertise and impartiality could not be guaranteed.

He was just reaching for his phone to call the counterparty to get it over and done with but suddenly, he realised that, over time, the ownership of the counterparty had changed, the whole management had been replaced, the market situation had turned upside down, and the financial situation even of his own organisation was catastrophic compared to the time when this will never happen clause was drafted.

Crises are priceless moments for learning; these moments when it becomes clear that the contract is ultimately only as good as the dispute resolution clause in it. But for this contract, this moment came too late.

So what if we need to discuss the force majeure clause with the counterparty, what it actually covers, whether it covers a pandemic, and if so, what then? So what if the public transport has been disrupted, borders are closed, raw material transports delayed, production lines come to a standstill, partners go bankrupt and executives are laid off or pass on as victims of a disease. So what if the contract does not say a word about any consequences or limitation of liability. Because it will never happen.

You have failed in drafting, if your arbitration clause, that was meant to avoid litigation, will be litigated for years, in order to know where the dispute finally should be resolved.

Never forget that a contract is only as good as the dispute resolution clause in it, and the things you thought will never happen, may happen tomorrow.

Q&A with new Partner Helen LehtoHelen Lehto joins Dittmar & Indrenius’ partnership in July 2022. Q: What keeps you busy...
Dispute resolution and sustainability - a delicate and evolving relationshipDisputes are perhaps the most traditional area where law firms assist their clients. While many...
Do not forget about tax in dispute resolutionWhen facing a potential dispute, there are many aspects and questions to consider. One item you...