Blockchain technology and its applications will change the world of transactions and with it, the world of intellectual property. The technology was previously known mainly in the context of cryptocurrency, but now multiple industries are exploring its potential applications. The possibilities the technology offers are nearly endless and because of its broad applicability, it will almost certainly have an impact on several business sectors. Below we discuss the application of blockchain technology to transparent supply chains and intellectual property registration and enforcement.

What’s So Special About It?

Blockchain is more than just the platform for the cryptocurrency Bitcoin, with which it is often wrongly confused with as being synonymous. Blockchain’s emergence in 2008 as the Bitcoin’s enabler was only the beginning and the past two or three years have brought the technology to the limelight especially because its properties make it a near-perfect disruptor to all business fields which use intermediaries to handle transactions between individuals, businesses and even machines.

It has been proven time and again that trust is a delicate commodity, and without it transactions have a short shelf life. As there is inherent distrust between parties in transactions, blockchain’s game changer feature is the way it changes the way we trust others. With blockchain, transactions can be secured without any of the traditional institutions that we have grown used to as intermediaries and that paves the way for blockchain to change the very nature of how transactions are executed. Due to its immutable nature, blockchain can also be used to change the way we look at supply chain integrity, IP registrations and enforcement of IP.

“As there is inherent distrust between parties in transactions, blockchain’s game changer feature is the way it changes the way we trust others.”

The importance being able to ensure supply chain integrity is paramount to all companies dealing with branded or otherwise exclusive goods. Blockchain is an excellent tool in bringing transparency into the process, and when you combine it with such technologies as the Internet of Things (IoT) and smart contracts, magic happens. Exhibit A of this claim are the companies that already tap into the blockchain for supply chain transparency, such as Provenance, which offers a digital passport for a product’s authenticity and origin, Everledger which is used for uploading the characteristics, history and ownership of diamonds to the blockchain and Modum, which offers a monitoring solution for pharmaceuticals and their temperature during transportation. These are initiatives which, at least to the level of trust exhibited by these services, have not been possible in the pre-blockchain era.

The contents of IP registration are traditionally defined by documentation, (trademark information, patent records, ownership details). By virtue of its nature, there are applications for the blockchain technology in the recording and verification of different components of such documentation, such as ownership, identity, contents, transaction history, etc. The blockchain technology could be used by the IP offices to aid in the registration and granting of IP rights, e.g. to be used instead of the traditional databases with information on registered trademarks, designs and patents. Changing the recording system to be based on blockchain would increase the registrations’ value and trustworthiness and create additional regulatory opportunities to build from these newfound possibilities.

The European Union Intellectual Property Office EUIPO has understood the possibilities blockchain offers and is developing their readiness to use blockchain to record and enforce IP rights. EUIPO has engaged blockchain experts, national IP offices and right holder representatives in the development of blockchain applications.

The blockchain technology has a definite potential to completely revolutionize IP enforcement and anti-counterfeiting. If the right holder is able to convey to the authorities, especially the customs, a message that authentic products contain an easily readable feature proving that the product is authentic, it would greatly enhance the potential for unauthorized products to be caught by the authorities. Technology related interactive tags is not new, but the previous solutions such as QR codes, NFC and RFID tags were much more prone to copying and other misuse than blockchain-related technology. Counterfeiters and dealers in grey market goods would be unable to alter the information contained in the blockchain.

A growing number of companies are riding the early developer wave and have started offering blockchain related IP services. Such companies include Bernstein Technologies, which secures IP assets and innovation processes, Kyna, which automates the transaction of patents, Ujo, a platform which allows musicians to automatically license their works through Ethereum and Blockai, which helps artists to register their copyrighted work. Several of the IP related blockchain developer companies are still on startup stage, but we are certain to see the amount of blockchain powered IP services to increase in the near future.

For blockchain to become more than pie in the sky, there is a lot of work to be done with technological issues. Most of all there is work to be done with legislators, so that the technology is not seen as an enemy of the state, but rather as its ally. However, not all states are reluctant to start implementing blockchain technology to their administrative functions. The Estonian government has been using a Keyless Signature Infrastructure (KSI) technology to allow Estonian citizens to verify the integrity of their records in government databases, helping Estonia to launch digital services such as e-Tax, and reducing the state’s administrative burden in the process.

“Blockchain has all the characteristics of being a game changer in the networked information economy.”

Blockchain has all the characteristics of being a game changer in the networked information economy. Dozens of countries are investing heavily on its applications, with China leading the pack with 56 % of all patent applications globally coming from Chinese companies. Because of its enormous potential, a lot of venture capital funding is available for its development.

A wide range of regulatory responses, as well as international standards and open source development programs already in place, open doors for the widespread use of the blockchain technology. It is already used in e.g. peer-to-peer lending, currency exchange, proof of authorship, data storage, securities trading and clearing. Time will tell how blockchain will change the game in these and in many other fields – especially those with outdated systems in place. 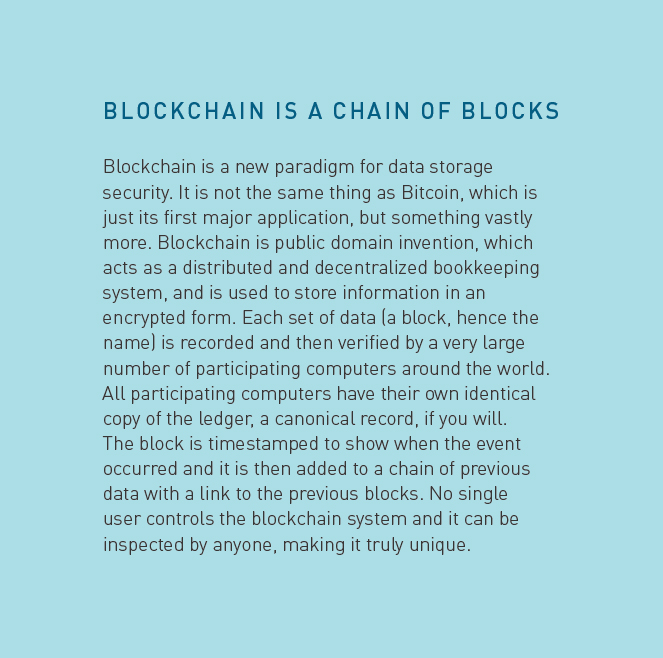 Article
Service provider selection and negotiation in 2021
23 Nov 2021 The procurement of modern ICT services is a lively sector, characterised not only by challenges present in all types of procu...
Article
Towards greener patents and innovations: Is your IPR strategy aligned with your sustainability goals?
23 Nov 2021 Sustainability is part of the strategy of every active company, irrespective of their business area. However, sustainability...