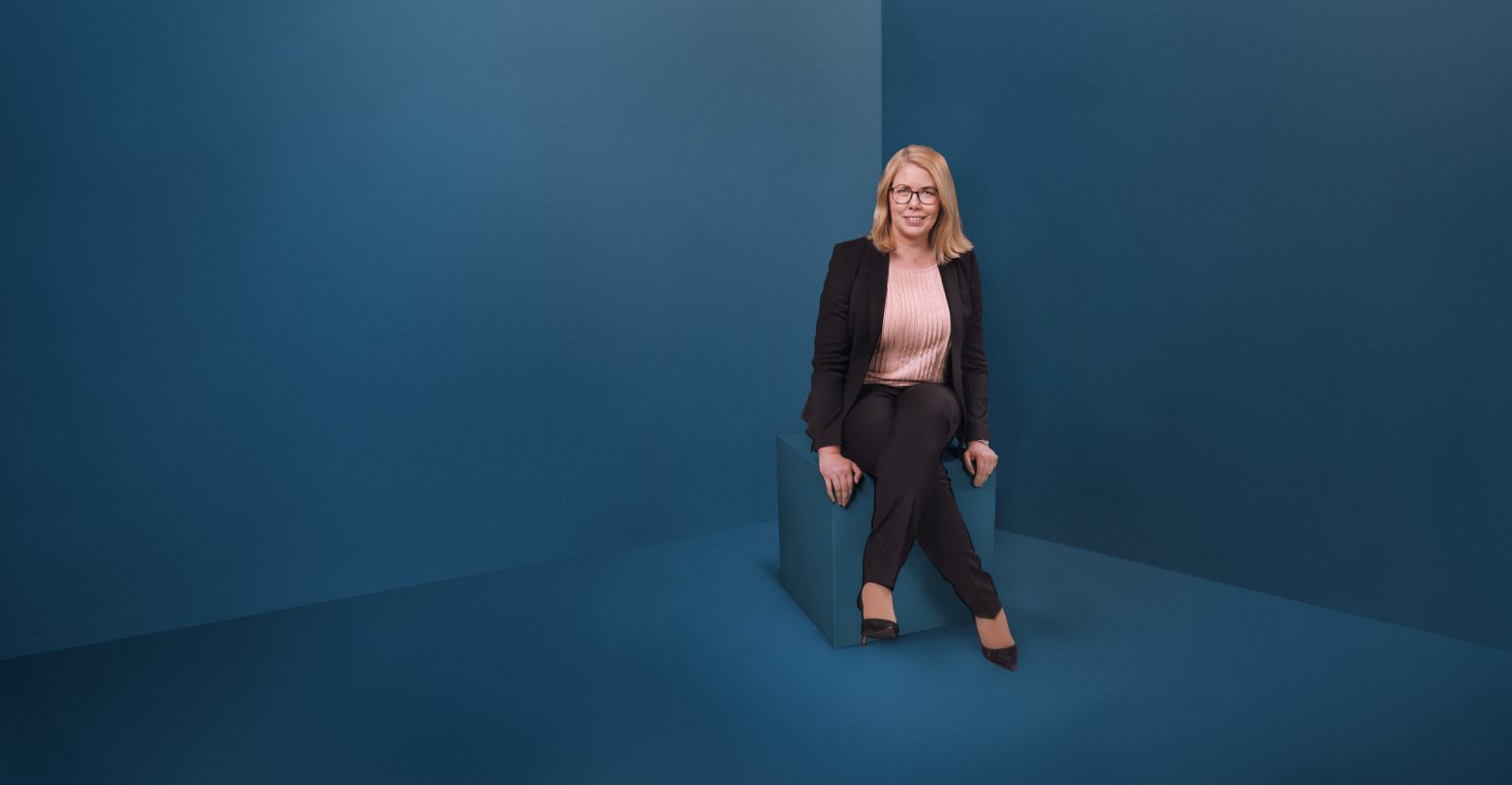 International Bar Association’s (“IBA”) annual conference held in Rome in October 2018 gathered attorneys from all over the world to meet fellow professionals as well as to gain insight on current legal topics. In this year’s conference, D&I’s Senior Attorney Ritva Aalto was one of the speakers in a roundtable discussion on taxation of income from controlled foreign corporations (“CFC”) in her role as the national reporter of the IBA’s Taxes Committee. CFC taxation is a very topical theme globally due to recent EU legislation and the international aim to prevent profit shifting to low tax jurisdictions.

The IBA and its taxes committee

IBA’s Taxes Committee is an active network which offers its members access to high quality tax expertise through e.g. publications and trainings as well as acts as an interface to build networks among tax lawyers. The Taxes Committee appoints national tax reporters who provide reports on recent tax developments in their respective jurisdictions and act as speakers in roundtable discussions in the IBA’s annual conference.

D&I’s attorneys are actively participating in the work of both the Finnish Bar Association as well as the IBA. Contributing to the Bar Association work both on national and on international level is an important part of the profession and supports us in serving our clients the best possible way. The IBA is an excellent platform to deepen our relationships with leading law firms from other jurisdictions and exchange views on the international developments within the legal market.

The roundtable discussion on the CFC rules

The EU countries need to implement the CFC rules of the EU’s Anti-Tax Avoidance Directive (2016/1164, the “Directive”) as of the beginning of 2019.  Finland is currently in the process of amending its current CFC rules, originally enacted in 1994, to comply with the Directive. Besides the EU countries, many other jurisdictions have or will enact CFC legislation, or update their existing rules, e.g. due to the OECD’s recommendations in the Base Erosion and Profit Shifting (“BEPS”) actions. This makes the CFC legislation a very topical global tax issue at the moment in particular for global multinationals – and a natural choice for one of the topics in roundtable discussions on global tax trends in the IBA’s annual conference.

In brief, the CFC taxation means that income of a low taxed foreign entity, which is owned or otherwise controlled by local tax residents, can be taxed directly in the hands of its owners on an accrual basis. Details of how a CFC is defined and what kind of income is taxed as CFC income vary significantly between different jurisdictions. The aim behind the CFC rules is to avoid artificial shifting of profits to subsidiaries in low tax jurisdictions, even though in many cases the CFC rules can also apply to genuine business operations.

The jurisdictions represented in the roundtable discussion on CFC rules in the IBA conference were Finland, the UK, Japan and Italy, supported by Co-Moderators from Argentina and Denmark. The members of the audience were also invited to share their views which added even more jurisdictions to the discussion.

The key takeaways from the discussion were the differences between the CFC rules, even between the EEA countries, as well as the increased burden for taxpayers arising from the interpretation of, and compliance with, the different rules and the risk of double taxation.

“The key takeaways from the discussion were the differences between the CFC rules, even between the EEA countries, as well as the increased burden for taxpayers arising from the interpretation of the different rules and the risk of double taxation.”

Among the EEA countries, the threshold for taxing the income of another EEA resident company as CFC income is expected to be subject to interpretations which can vary between jurisdictions. In particular, the application of the substance requirements e.g. to holding companies or intra-group financing companies is likely to be under scrutiny in structures involving EEA countries. Outside the EEA, the variations in the applicable CFC rules are even greater and the EU’s freedom of establishment does not restrict the domestic CFC rules and their interpretations i.e. the rules can be significantly stricter than within the EEA.

Based on the jurisdictions covered in the roundtable discussion alone, it was evident that the CFC rules of each relevant jurisdiction needs to be analyzed in detail and in many cases the interpretation requires e.g. in depth assessment of the types of income received by the potential CFC, or calculating the potential CFC’s level of taxation under the tax rules of the parent company’s jurisdiction. Needless to say this can cause significant additional administrative burden for many multinationals.

It was also identified in the discussion that many jurisdictions do not allow any tax credit in cases where the income of the same CFC entity is taxed as CFC income in several jurisdictions due to the fact that usually also indirect ownership in a foreign entity can trigger CFC taxation. This is an example of a scenario which can lead to double or multiple taxation at a group level.

Shortly following the IBA conference, the Finnish Government Proposal on the new CFC rules was issued on 1 November 2018. 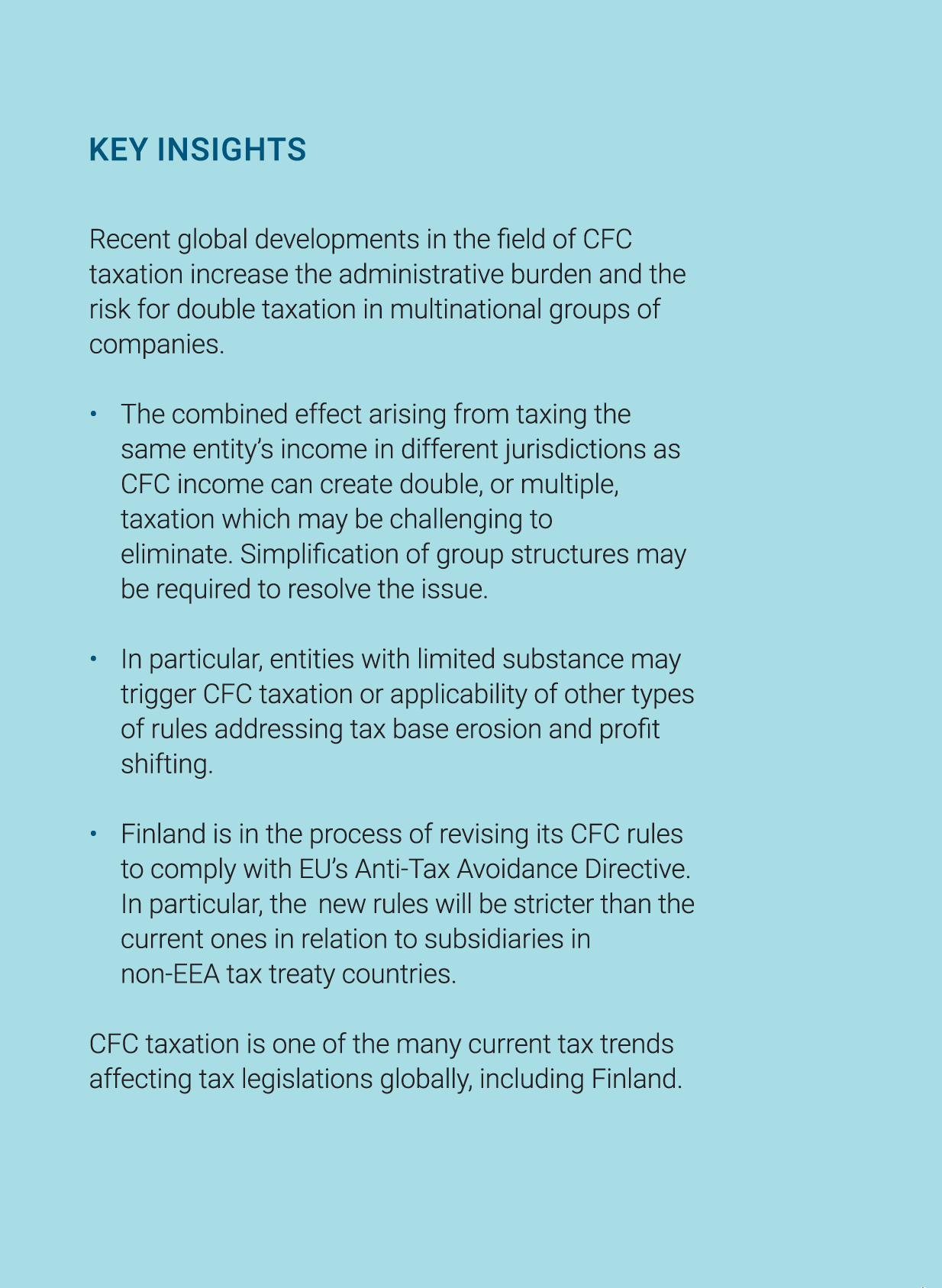