The Ministry of Finance of Finland has issued a draft government proposal on international tax dispute resolution mechanisms on 27 August 2018. The draft proposal implements the Directive on Tax Dispute Resolution Mechanisms in the European Union (2017/1852, the “Directive”). In addition, the proposed new legislation addresses certain other tax dispute resolution mechanisms related to the interpretation of tax treaties. The aim of the new legislation is to enhance the resolving of international tax disputes and to avoid double taxation in cross-border context.

The following table illustrates the main changes to the current processes and contents of the draft proposal on a high level. 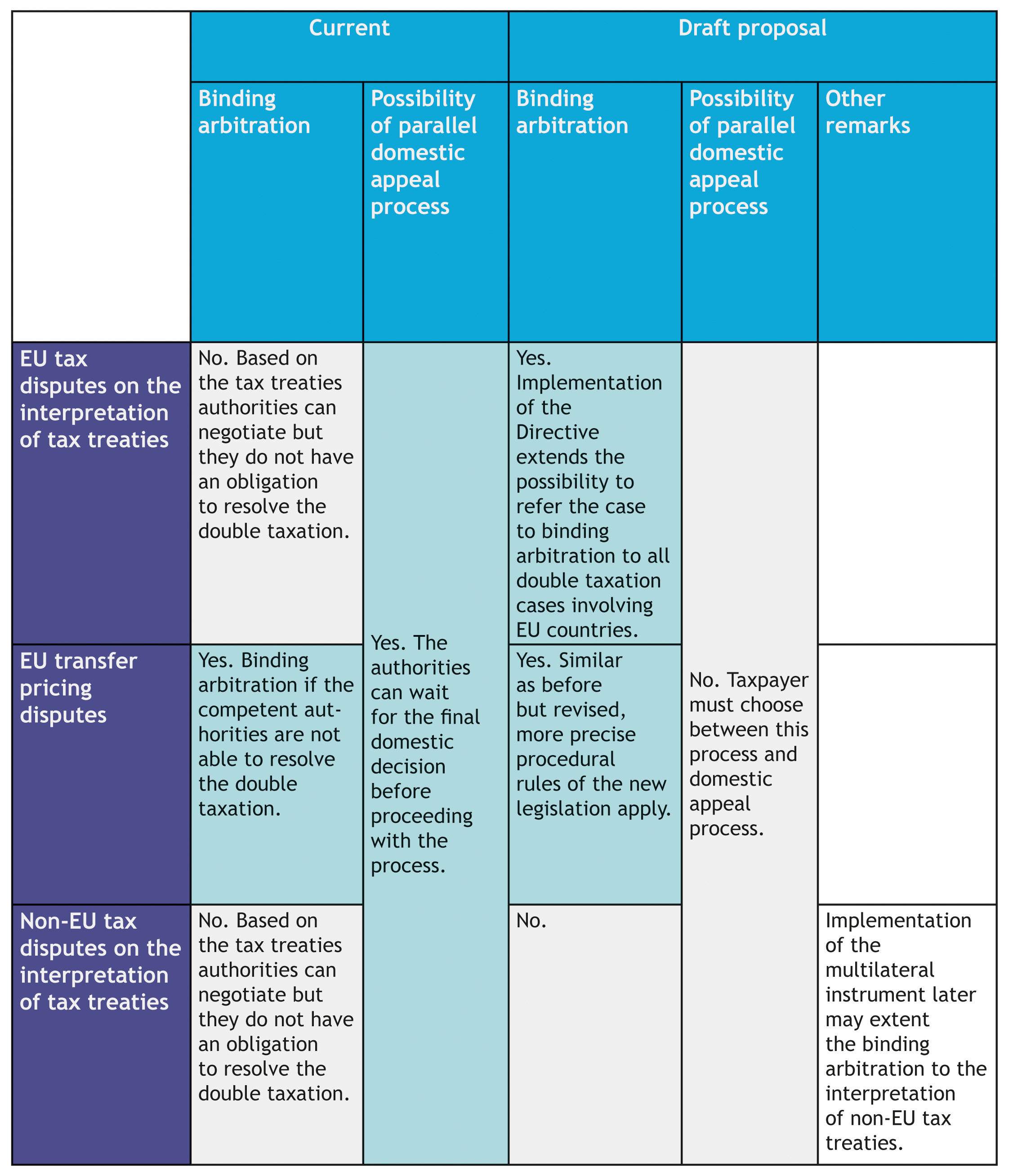 Timing of the Legislative Process

The draft proposal is currently under public consultation. The contents of the proposal are therefore subject to change. The new legislation is proposed to apply to applications filed on 1 July 2019 or thereafter which concern tax years started on 1 January 2018 or later. However, part of the new legislation, such as the obligation to choose between the tax dispute resolution mechanisms and the domestic appeal process, is applicable to all applications filed on 1 July 2019 or thereafter.

Reflections on the Draft Government Proposal

Many of the proposed changes provide long-awaited procedural rules for tax disputes relating to the interpretation of tax treaties. Currently, most of the relevant procedural provisions are outdated and not explicitly applicable to international tax dispute resolution processes. Implementation of the Directive provides more effective means for taxpayers to eliminate double taxation between EU countries since the threat of binding arbitration can be expected to encourage the competent authorities to negotiate, and ultimately double taxation should be eliminated through arbitration. This type of process is currently only applied in transfer pricing disputes involving EU countries.

The draft proposal also includes certain changes to the current processes which can in many cases limit the taxpayers’ legal remedies. The taxpayers would in practice need to choose whether to refer the case to a tax dispute resolution process under the proposed legislation or the domestic appeal process. This would increase the importance of the strategic decisions taken during a tax audit phase regarding potentially threatening cross-border tax disputes. Since this provision is proposed to apply to all applications filed on 1 July 2019 or thereafter, regardless of the tax year the application covers, the draft proposal may have great relevance in many of the cross-border tax disputes pending today.

One aspect which the draft proposal seems to ignore is the extension of the suspension of tax enforcement to the tax dispute resolution processes under the proposed legislation. Currently, it is possible to request the temporary postponement of the payment of taxes only during domestic appeal processes. If this discrepancy is not fixed, it may render the use of tax dispute resolution mechanisms a less attractive alternative in many cases.

We are happy to discuss the implications of the proposed legislation in concrete situations as well as keep you updated on the legislative process.

Finland to tax indirect disposals of Finnish real estateUpcoming new tax legislation will allow Finland to tax non-residents’ capital gains from...
D&I webinar - Changes in taxation of real estate investments in FinlandIn this webinar, we will take a look on the current changes to taxation of real estate investme...
First large-scale climate litigation filed in FinlandIn a historic first, Greenpeace and the Finnish Foundation for Nature Protection, Suomen Luonno...