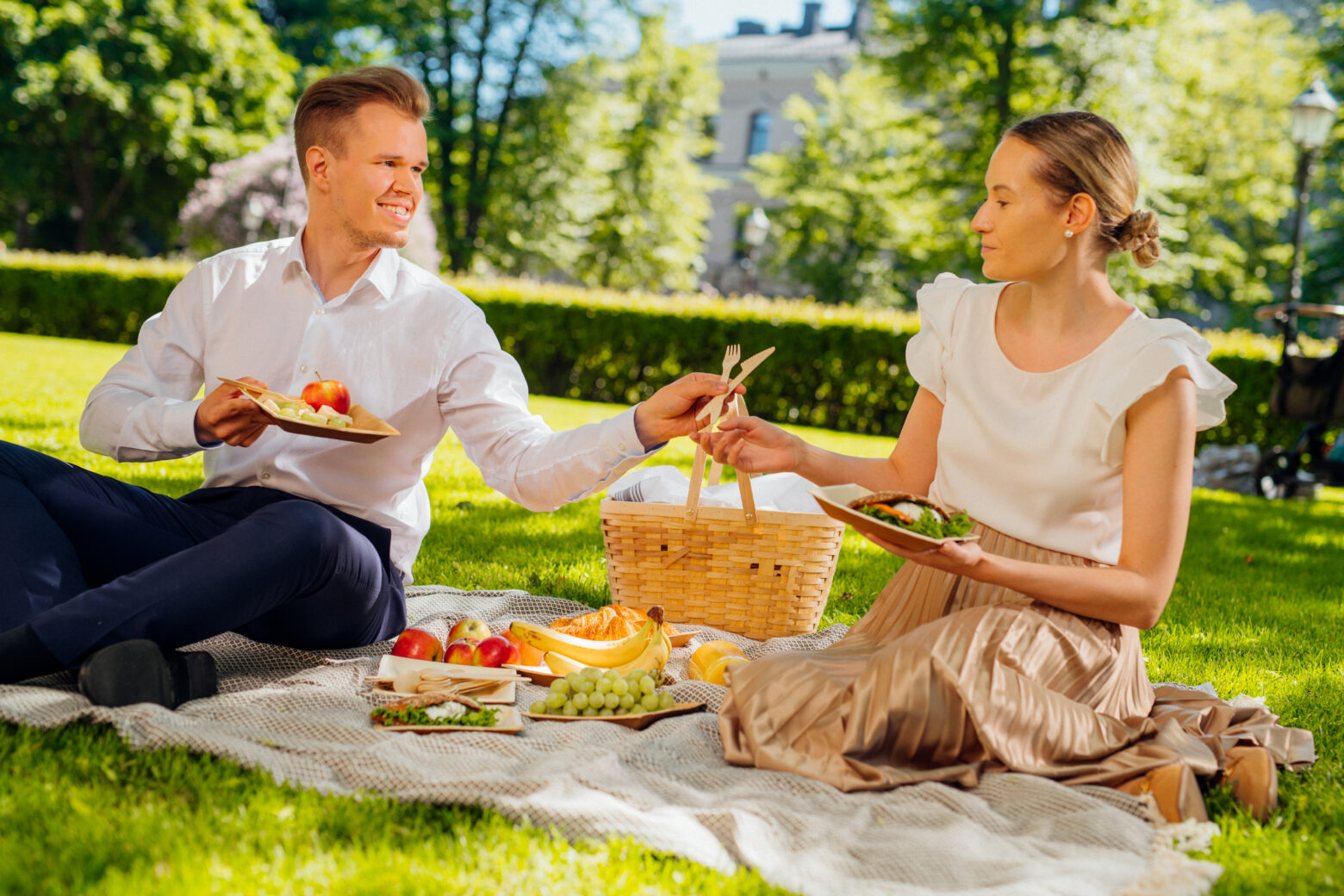 With summer well underway, many of us have enjoyed picnics outside, food on-the-go and drinks and ice-cream by the seaside. The obvious downside to this, however, are the plastic wrappers, packages and other litter being cast around, ultimately ending up polluting the environment and littering the oceans. The EU’s Single-Use Plastics Directive (2019/904) (the “SUP Directive”) is globally one of the most ambitious tools for reversing these effects and the most imminent piece of regulation in the European battle against the plastic crisis and especially marine littering.

The SUP Directive entered into force already in 2019 allowing a two-year implementation period for EU member states, the end of which is now just around the corner. As of 3 July 2021, member states should have their national SUP laws in place with the first set of restrictions, namely explicit bans of certain products and marking requirements for others, becoming applicable. The new requirements will mean a significant step forward in the EU’s action plans for the reduction of plastic littering and pollution and for the promotion of the circular economy and sustainable business models. For all its vitally important objectives, many questions have surrounded the SUP Directive’s key concepts and its scope of applicability, only recently (and only to some extent) clarified by guidance issued by the European Commission, leaving both the relevant manufacturing industries and, arguably, the supervising authorities in a challenging position.

The SUP Directive imposes various significant requirements on certain types of single-use plastic products, which represent typical waste found on European beaches and causing marine littering, for example beverage cups, food containers, plastic bags and other typical single-use plastic products, as well as oxo-degradable plastic and plastic fishing gear products. The requirements under the SUP Directive apply depending on the product type, with the general approach being that where sustainable, non-plastic alternatives are readily and reasonably available for a certain product type, such products will be subject to stricter requirements, ultimately a total ban on placing them on the market.

A more detailed description of the product types targeted by the SUP Directive and the respective applicable requirements is presented below: 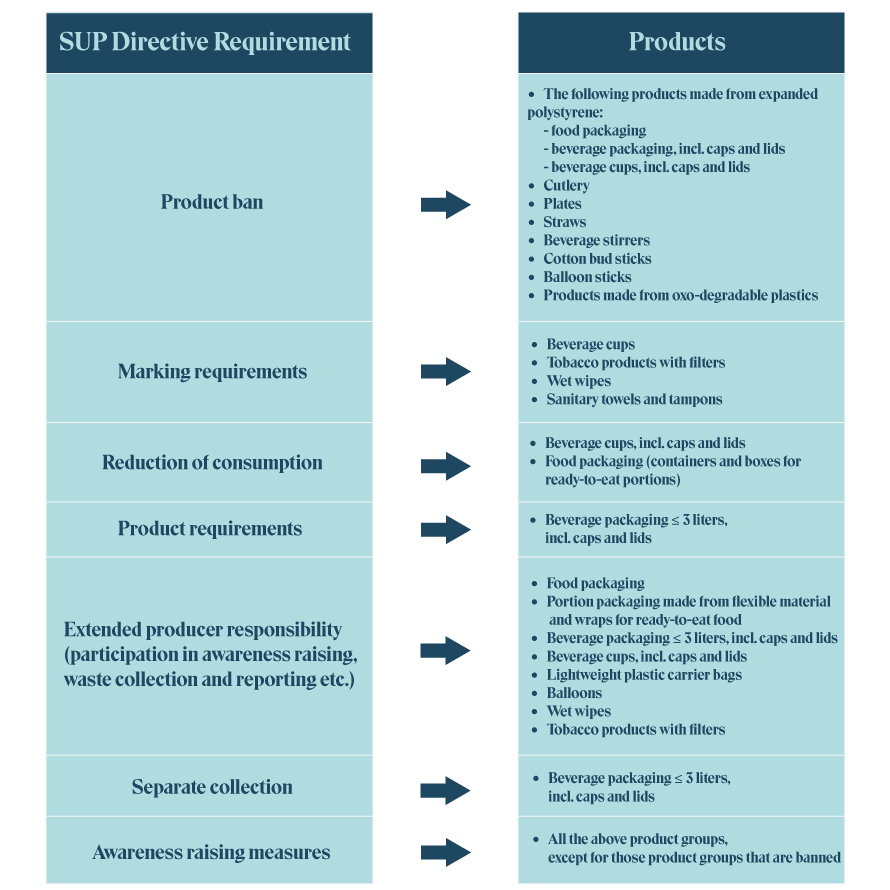 Summer ’21 kicking off with product bans and marking requirements

The requirements under the SUP Directive will not become applicable at once, but instead will be rolled out subject to a separate timetable. The first wave of requirements include product bans for certain single-use plastic products, such as cutlery, plates, straws, stirrers and balloon and cotton bud sticks, and marking requirements for sanitary items, wet wipes, tobacco products with filters and beverage cups. During a transitional period until 3 July 2022, manufacturers may comply with the marking requirement by using non-removable stickers instead of printing the required marking onto the packaging or product as required. As for the product bans, for example shops will be allowed to sell banned products that have remained in their warehouses or on their shelves since before 3 July 2021, as such products are deemed to have been placed on the market prior to the product ban.

At a later stage, we will see requirements concerning measures to reduce the consumption of food containers and beverage cups, further product requirements relating to, for example, plastic bottles as well as extended producer responsibility schemes covering costs of waste management and awareness-raising measures, as further specified by national implementation.

In Finland, the implementation process concerning the SUP Directive has so far been delayed due to, for instance, the delayed publication of necessary guidelines on the EU level (see further below). The preparation of the main legislative package for the Finnish implementation has been scheduled for autumn 2021, but the marking requirements and product bans under the SUP Directive will be implemented sooner in attempt to meet the deadline of 3 July 2021. The marking requirements and product bans are being implemented through the Government Decree on Certain Plastic Products to be passed pursuant to new provisions of the Waste Act (646/2011). These new provisions have been passed in the nick of time since the Finnish Parliament approved the respective legislative amendments only on 23 June 2021. The Government Decree is expected to be issued without delay after the new provisions have entered into force, most likely in early July 2021.

Since before the SUP Directive, Finland has been preparing a voluntary Green Deal agreement concerning the reduction of single-use plastic food containers and plastic quantities therein as part of the national Plastics Roadmap for Finland. The Green Deal agreement is being prepared and will be signed by the Finnish Ministry of the Environment and relevant industry associations, after which companies may participate by committing to the objectives and measures set out in the agreement.

The Green Deal is also intended to constitute a measure under the consumption reduction requirement set out in the SUP Directive, which obligates EU member states to take necessary measures to achieve an ambitious and sustained reduction in the consumption of single-use plastic products from 2022 to 2026. According to the SUP Directive, this obligation can be met by means of agreements between competent authorities and relevant economic sectors, allowing for a smoother and more collaborative preparation process and higher flexibility in terms of adopted measures and their subsequent updating. 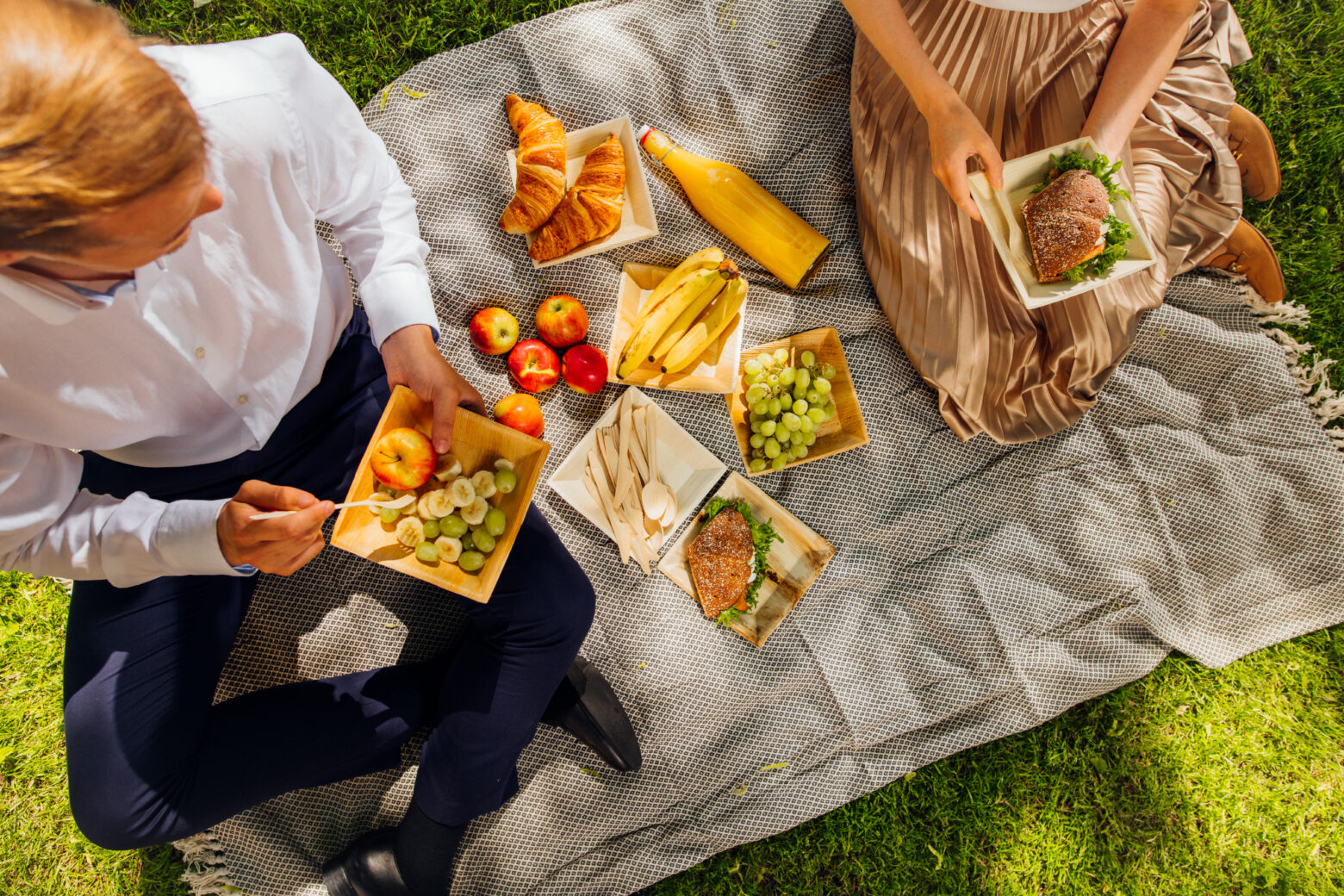 The intricate and granular concept of single-use plastic products under the SUP Directive has lent itself to heated debate with opposing positions on what should be considered as plastic for the purposes of the directive.

Deadlines approach but questions remain – what are single-use plastic products?

Certain aspects of the SUP Directive have been and still remain slightly ambiguous although the application of the directive is all but at hand. Importantly, there have been broad discussions around the precise definition of a single-use plastic product under the SUP Directive and, therefore, understandable confusion as to whether the SUP Directive applies to certain products or not. A key piece of guidance in this respect, are the European Commission’s guidelines on single-use plastic products, which initially should have been published by 3 July 2020 to help legislators, authorities and relevant product manufacturers to prepare for the upcoming legislation. However, this guidance was considerably delayed and was published only on 31 May 2021 leaving little time before the implementation deadline.

Single-use plastic products, to which the directive applies, are essentially defined as products that are made wholly or partly of plastic and are typically intended to be used just once or for a short period of time before their disposal. The SUP Directive introduces an adapted definition of plastic referring to other than unmodified natural polymers, to which additives or other substances may have been added and which can function as a main structural component of final products.

The intricate and granular concept of single-use plastic products under the SUP Directive has lent itself to heated debate with opposing positions on what should be considered as plastic for the purposes of the directive. Further, the broadness of the relevant definitions means that also products, which as such are not plastic, may be under the scope of the directive, for example due to the application of plastic coating onto the surface of the products, as stated in the Commission’s guidelines.

As a more general observation, it is worthwhile to consider whether the requirements under the SUP Directive (inevitably to some extent constituting ‘one size fits all’ solutions) will hit the mark in the battle against marine littering across EU member states. In the course of the Finnish implementation preparations, it has been specifically discussed and noted that the status and specifics of marine littering in Finland significantly differ from that in other EU countries. Yet, many of the measures under the directive apply identically across the EU.

With the application of the first requirements under the SUP Directive at hand, relevant industry participants should by now be all but prepared for the new regime, since the Finnish Safety and Chemicals Agency will soon be charged with the task of supervising compliance with the products bans and marking requirements. Above all, relevant entities should have any affected products in their stock and warehouses duly treated, arranged and documented to demonstrate compliance with the product bans and marking requirements.

The outright ban of certain products imposed by the SUP Directive has increased the need to develop sustainable, plastic-free alternatives to conventional single-use plastic products. This trend has and continues to pave the way for sophisticated and innovative R&D work by both established market players and new participants seeking novel solutions to replace plastic content in single-use products while retaining the undeniable benefits of plastic. In the development of these new solutions, it is paramount that companies ensure and implement sufficient protection for their intellectual property rights from the offset, including clear agreements on who owns the respective intellectual property rights created in connection with the development work.

The preparation for the SUP Directive has seen active discourse and cooperation by and between relevant stakeholders, interest groups and authorities alike. Continued dialogue is recommended in order to ensure a smooth transition into a new, more sustainable era of regulating single-use plastic products.