During the past years, the Finnish Tax Administration has carried out a number of tax audits focusing on transfer pricing. The tax audits have lead to significant adjustments to the taxable income of the Finnish entities.

The Tax Administration has recently published statistics which reveal that the taxable income has been adjusted in 34 out of the 63 transfer pricing tax audits carried out in 2012–2017. The total amount added to taxable income in these tax audits is astonishing EUR 3.048 billion. This means that on average the additional taxable income added based on a transfer pricing tax audit has been close to EUR 90 million. As a consequence, the amount of additional taxes and other payments, such as late payment consequences and potential punitive tax increases, subject to a dispute can often be tens of millions – or even hundreds of millions. 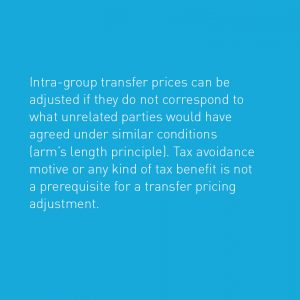 Some of these transfer pricing disputes have already been resolved in courts. However, many of the above mentioned disputes are still pending due to the length of the appeal processes.

One of the most significant legal questions in the transfer pricing disputes is the borderline between recognition of the actual transaction and re-characterization of a transaction. Recognition means respecting the form chosen and followed by the taxpayer and assessing whether its pricing is at arm’s length. In contrast, when a transaction is re-characterized, taxation is based on the form unrelated parties would have chosen (e.g. sale is considered an arm’s length transaction form instead of lease).

The Supreme Administrative Court has confirmed that re-characterization is unlawful in the context of transfer pricing adjustment (KHO 2014:119; requirement to respect the chosen business model was confirmed in KHO 2017:145).

Re-characterization is only allowed when the general anti-avoidance provision is applicable which requires e.g. that there is an intention to achieve inappropriate tax benefit through an arrangement which is not supported by sufficient business reasons. Since this is usually not the case in the transfer pricing disputes, the Tax Administration’s authority is often limited to assessing the pricing of the actual transaction carried out between group companies.

Regardless of the Supreme Administrative Court’s published case law, disputes around the concepts of recognition (or delineation) and re-characterization continue to surface. 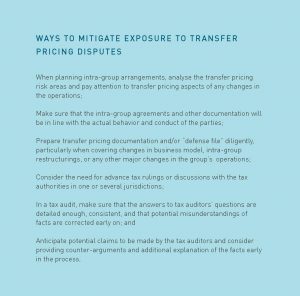 Litigation phase in a transfer pricing dispute is often complex and the processes tend to last for several years. There are often several areas subject to dispute; understanding of the facts, legal basis for the transfer pricing adjustment, pricing and valuation, and often also tax procedural questions. The challenge is to present the multidimensional case, usually following extensive correspondence with the Tax Administration in the tax audit, in an understandable way to the Board of Adjustment and the courts. In many of the major transfer pricing disputes the case has ultimately been decided fully or partly in favor of the taxpayer in the appeal process. Prudent planning and good argumentation are essential to overturn the Tax Administration’s position.

In transfer pricing cases there is also possibility to refer the case to a Mutual Agreement Procedure between the countries involved. This can take place instead of or after the domestic appeal process. In the Mutual Agreement Procedure the authorities from both countries negotiate how the double taxation can be eliminated. The process is most effective between EU Member States whereas with other countries there is no guarantee that the authorities reach a conclusion at all.